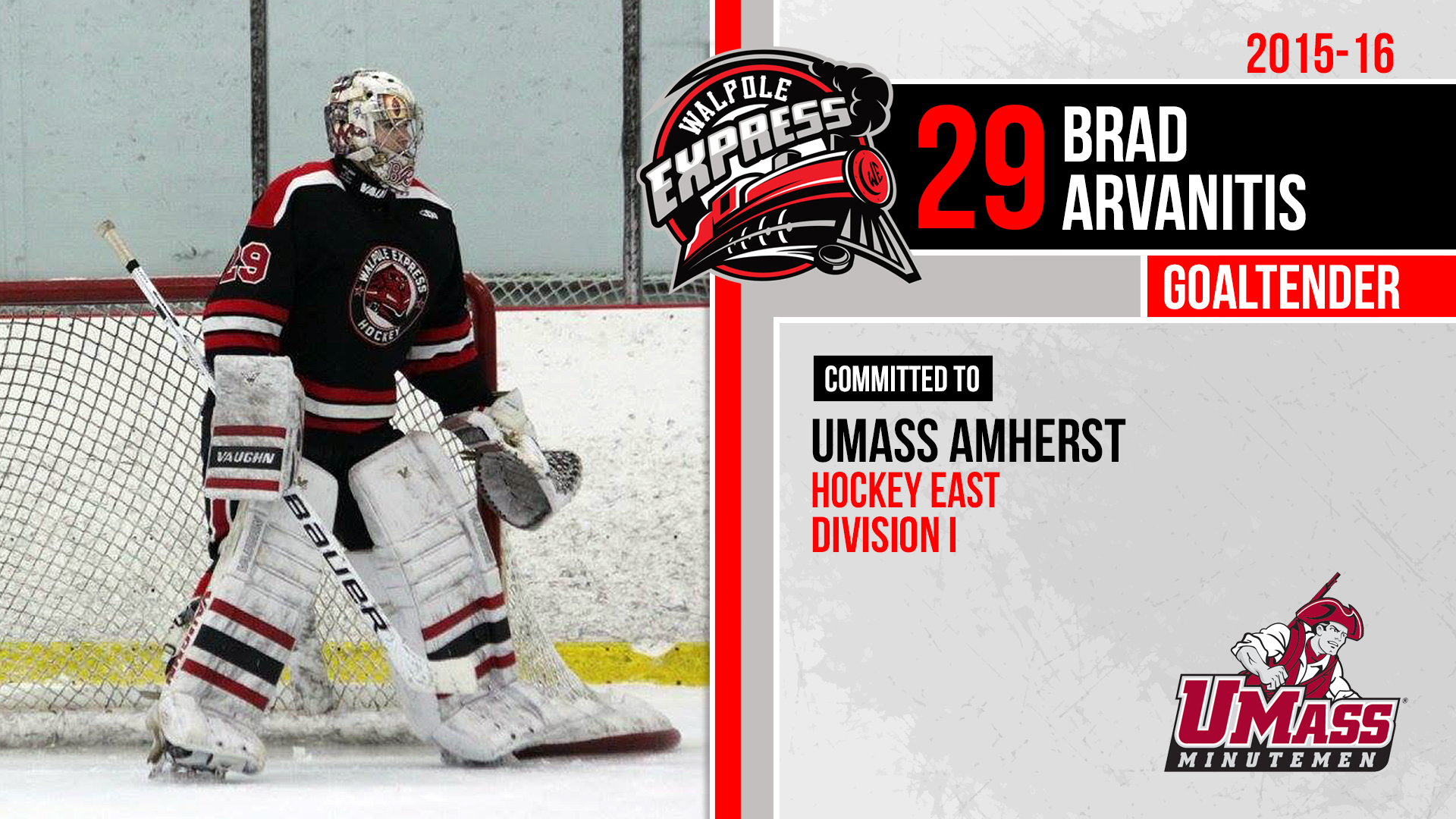 Walpole, MA – Former Walpole Express goalie and Holliston (MA) High School standout Brad Arvanitis took a circuitous route to Division 1 but thanks to some serious determination and mental fortitude has finally achieved his dream by committing to play at the University of Massachusetts-Amherst next fall. UMass is a member of Hockey East.

“Arvanitis played for Walpole Express, first for a midget team and then for the Elite Junior team headed by Cos Polino during the 2015/16 season,” said Express Goalie Coach Ed Kesell. “His season on Elite was up and down but he stayed positive and worked continuously to improve both his technical and mental game.”

His growing confidence was clearly evident, prompting Clay Adams, former Express coach and current assistant coach for USHL’s Lincoln Stars, to invite Arvanitis to camp for the experience. Not expecting anything but the opportunity to skate with some top players, Arvanitis went to camp with an open mind. There, he did more than just skate; he played well enough to open some eyes on both the coaching staff and among the ranks of the college scouts in attendance.

The result: he had a real shot at making the team out of camp.

That is, until an ill-timed knee injury – a meniscus tear suffered during a game on the last day of camp – knocked him out of contention.

But thanks to his amped up mental strength, Arvanitis didn’t lose his cool. After surgery and rehab Arvanitis and Kesell got back on the ice and back to work. “He worked tirelessly to get his game back to where it needed to be,” Kesell said.

Because by then the season was a third completed, the Express already had an established goalie – and it wasn’t Arvanitis. Fortunately, another team reached out and gave him a chance to play. The 6’2 Arvanitis played the rest of the 2016/17 season with the Coulee Region Chill of the North American Hockey League (NAHL).

One night he got the call many goalies dream about. “Brad’s road to Hockey East and UMASS Amherst was certainly challenging, but worth the delays and the hardships,” Kesell said. “Everyone at the Walpole Express wishes him much success in his D1 collegiate career.”